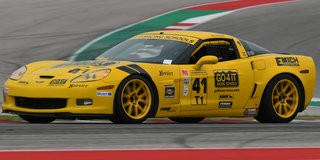 One driver doubled up on class championships within the Mid-States Conference this year. Michael Pettiford took the top spot in Touring 1 by racking up eight wins in his Chevrolet Corvette GS and amassing 70 more points than runner-up David Muramoto in a Nissan 350Z. In a tighter battle, Pettiford also claimed the Touring 2 championship, this time in a Pontiac Solstice GXP, by 13 points over the BMW M3 of James Leithauser.

In B-Spec, Frank Schwartz and his MINI Cooper emerged with the Mid-States championship by only 10 points over a duo of Mazda 2 drivers who managed to tie for the runner-up spot, those racers being Riley Salyer and John Phillips. Only eight points behind Salyer and Phillips was James Rogerson’s Honda Fit. For Schwartz, this is his second B-Spec title on the year as he earlier claimed the U.S. Majors Tour Western Conference championship in the class.

The Mid-States Conference produced a couple other close finishes at season’s end. In GT-2, the three Conference wins claimed by Boyd Lear and his Chevrolet Monte Carlo where not quite enough as Mike McGinley and his four Conference wins in a Chevrolet Corvette won out by a scant four points. Then in Formula Enterprises 2 it was Liam Snyder who claimed the championship by only eight points over Robert Vanman, both driving SCCA FE2 Mazdas. And eight points was also the winning margin in Formula F as Max Kaeser, with three Conference wins in a Euro Swift SE-1, just edged out Bill Kephart’s Vestal Crane 02 15AB for the title. Only two points behind Kephart in third was the Van Diemen RF99 Honda of Jay Messenger.

The Sports Car Club of America®, Inc., founded in 1944 and currently celebrating its 75th Diamond Anniversary, is a 67,500-member motorsports organization that incorporates all facets of autocross, rally and road racing at both Club and professional levels. With headquarters in Topeka, Kansas, the SCCA annually sanctions over 2,000 events through its 116 Regions and subsidiary divisions. Much of the SCCA’s activities are made possible with support from the following Official Partners: Hagerty, the Official Insurance Partner of SCCA; Hawk Performance, the Official Brake Products of SCCA; Sunoco, the Official Fuel of SCCA; and Tire Rack, the Official Tire Retailer of SCCA. To learn more, please visit www.scca.com.

Photo: Michael Pettiford scooped up the Touring 1 Mid-States Conf. Championship in a Chevrolet Corvette, then repeated the feat in Touring 2 driving a Pontiac Solstice GXP