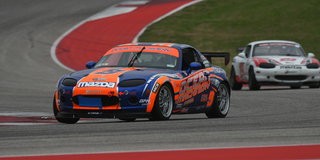 AUSTIN, Texas (February 10, 2019) – The tricky track conditions continued on Sunday for the third and final day of the Hoosier Racing Tire SCCA Super Tour, hosted at Circuit of the Americas by the Lone Star Region. Still wet and cold from the weekend (and morning) rains, there was no doubt that the tire choice in the 35-minute (or 14 lap) races were grooved rain tires around the 20-turn, 3.427-mile track.

Working through traffic on lap nine, Stripling opened the door for Russell when he spun and continued. Even with the spin, however, the closest Russell could get was nearly two seconds back. Stripling recovered and crossed the finish line after 13 laps with a 2.150-second win.

“This is a stacked field,” Stripling said. “It was challenging, it was really just about putting your head down and moving forward. I got into it with a little lapped traffic and spun the car. That’s a little more nerve wracking than what you want. The conditions made it a little more exciting.”

It was yet another impressive display in Spec Miata under the same circumstance. Danny Steyn, already a winner that morning in Super Touring Lite, walked the field in his No. 39 Adept Studios/Rossini Engines/OPM Autosports/G-Loc Brakes Mazda Miata.

Chased by a field that included six National Championships in Michael Carter, Matt Reynolds and Jim Drago in the top five and utilizing the rain knowledge from two groups earlier, Steyn finished the 12-lap race with a 8.650-second margin of victory.

“Fortunately, I did have the STL race,” Steyn said. “I used that to go left and right, deep and early, try every single approach and that paid off. And, of course, I love the rain. There’s nothing better than being sideways in a Miata, it’s such a beautifully balanced car.”

While it appeared to be better conditions in the afternoon, a quick review of winners in the “wings and things” group right after lunch suggested otherwise.

“It was definitely not a slick tire track,” Mark Snyder, the Formula Enterprises winner, said after each driver in the FE field elected to go out on slicks. “I wish I put the clear visor on, I wish we put wet tires on, but you make mistakes and we still all ended up keeping it out of the wall.”

“At the beginning, I didn’t think rain tires was the right setup,” Ratton said. “Then I got on track and I saw Mark Snyder hit a puddle and I thought alright, this is the right way.”

But the star of the show in the group was Yarin Stern in Formula 1000, who bested a stout field of Formula Atlantic and Prototype 1 drivers to take the class and overall win on the wet track. The 23-year-old Israeli national made his SCCA debut in an Aprilia-powered Griiip and took the win.

“The race itself was amazing,” Stern said. “I really love the circuit. I started fifth and had a very nice fight with the Formula Atlantic car (Flinn Lazier). I overtook him and managed the tires from there.”

Those in between decisions continued as the rain stopped but the fog rolled in. Still damp, another class “upset” happened in the big bore group, with GT-2 driver Barry Boes taking the overall win in the No. 31 Accio Data Ford Mustang.

“We had a tough decision to make,” Boes said. “We knew the track was probably going to be drying out. We went out on wet tires, we made some suspension changes, and it just worked like magic. After the track started to dry out, I had to slow down the pace a little bit. The tires were getting squirmy.”

Jennerjahn, a class veteran, had high praise for the 21-year-old.

“It was fun when I saw him spin, I thought I’m going to be ok,” Jennerjahn said. “But he came back so quick, passed me, and I thought ‘I’m so old, will I be able to hang on to him?’ Somehow I was able to. I felt real comfortable driving with him after just a couple of laps. A lot of young guys just don’t have that discipline, but I’d race with him any day. He’s a good driver.”

The SCCA Hoosier Racing Tire Super Tour continues with the third event of the season, March 15-17, at Road Atlanta. More information can be found at SCCA.com.

Below are provisional race results from Saturday’s Hoosier SCCA Super Tour from Circuit of the Americas with Class: Name, Hometown, Region and Car.