#TBT The First Life of the Bridge Golf Club 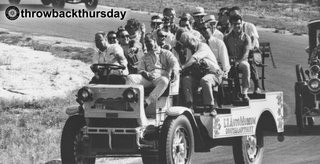 The Bridgehampton Race Circuit on Long Island, Ney York was one of the first permanent road racing facilities, following the lead of Thompson Speedway, Road America, and Watkins Glen International. The venue opened in 1957, the same year that Lime Rock Park and Mazda Raceway Laguna Seca began holding events. The track closed in 1998 to make way for a golf course.

Race winner, Denis Hulme is shown riding shotgun to Henry Austin Clark and the crew during the preliminary festivities of the 1967 Can-Am event at Bridgehampton. Hulme went on to win the 200-mile sprint race over Bruce McLaren. A record crowd of 35,000 watched as Hulme defeated his team captain in the one-two McLaren-Chevrolet finish.

Photo courtesy of the SCCA Archives